IT’S A HARD KNOCK LIFE FOR US

I was hospitalized for the first time when I was 9 years old, and put on psychotropic medications. Continuing on through the course of my teen years, I spent over 7 birthday’s, and Christmas(s) institutionalized. One year after my first hospitalization, my mother signed a contract with an EI school that said they would help with behavioral modification of my OCD rituals. However, that was not the case. The teachers and staff of this program sexually harassed and bullied us. When we fought back, they video taped only our reactions. The videos were then sold to Michigan State University’s Psych program for research. I was one of the lucky ones, because my parents were 2nd generation tax paying citizens of the city where the program resided in. The ACLU got involved, not because of the abuse, but because I was denied my right to public education in my own school district. (I regret not suing.) I was then rehabilitated into a normal school setting, but monitored by former staff and a particular social worker from the program all the way until I dropped out of high school. At the age of 17 I hospitalized against my will, and by 19 was 277 Lbs. from the cocktail of medications they put me on. I was on 2000 mil of Depakote, 6 mils of Risperdal, plus a few more at one time. Throughout the course of my life, I’ve been on every psychiatric medication in the book. One day, about 4 years later, I had something of a divine Intervention occur. I don’t know if I really was born mentally ill; mkultra’d suffering from an Existential crises, possessed by a jinn, demon; or the devil himself… All I know is that the voice in my head that used to harass me went away! It’s been 10 years now. Thank God I took the leap of faith to stop my medications. Since then; I’ve been so much healthier, had I kept taking them, I more than likely would have ended up dead. My story doesn’t end here. If you work with the Press, and would like to know more. Contact me via twitter: @57KazqZ6UYIq2P2 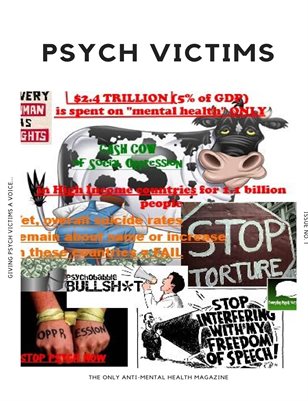